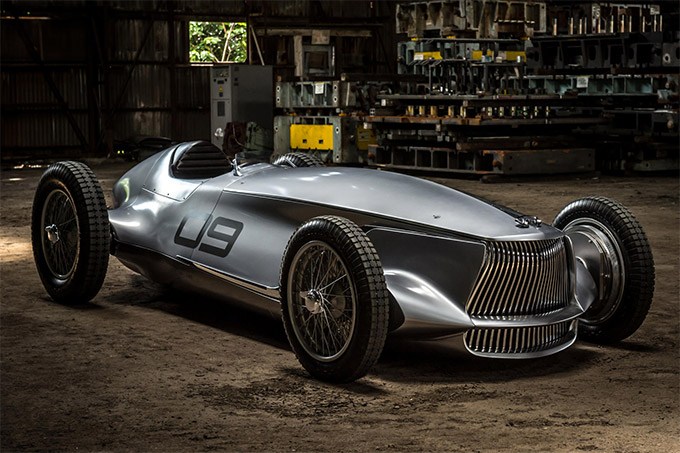 Infiniti, a top-of-the-line Nissan subsidiary, revealed a small electric roadster that attracted the curiosity of collectors and car fans all over the world.

As you may know, a luxury vehicle and an electric motor are decidedly good combination. Infiniti, a subsidiary of Nissan has decided to combine technological innovation and retro elegance in its latest model and it works wonderfully. Named Prototype 9, this completely electric roadster has been the work of a goldsmith. The various parts of the body were designed and assembled by Japanese craftsmen in Oppama (not far from Yokohama), which were inspired by certain sports models of the Prince Motor Company, which merged with Nissan in 1952.

“Prototype 9 celebrates the tradition of ingenuity, craftsmanship and passion of our forebears at Nissan Motor Corporation, on whose shoulders we stand today. It started as a discussion: What if INFINITI had created a race car in the 1940s? If one were to imagine an open-wheeled INFINITI racer on the famous circuits of the era, such as Japan’s Tamagawa Speedway, what would that look like? The sketches were stunning and the idea so compelling that we had to produce a prototype. As other departments became aware of this, they volunteered their time to create a working vehicle.”

Unfortunately, its use is limited to sessions of about twenty minutes (depending on the driving). Anyway, this is a vehicle with a certain charm that’s worth your attention.