This project is named O.R.B. and it was awarded at CES 2010 as the best item in the wireless accessories category. From the design perspective, ORB can be used as an ear ring or a simple ring, it looks pretty futuristic and glossy. From the functionality perspective, O.R.B. connects to your smartphone and reacts with vibration or sound to new calls, messages and reminders. It had a small bluish screen that displays alerts when the wearer receives an email or messages, a call, or when it’s time for an important meeting in the day’s agenda. It even unfolds and becomes a twisting Bluetooth headset, as seen in the first image. 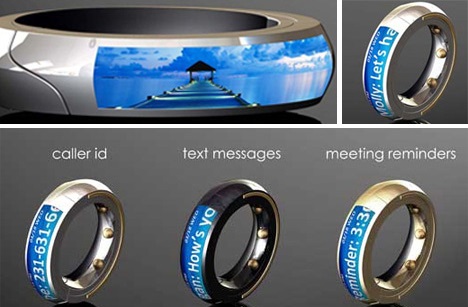 According to the manufacturer, this device is a “Digitset™”, allowing the sound to travel to the ear without inserting annoying earpieces in it. O.R.B. is shockproof and waterproof, the digital display is a FOLED and although it’s not officially released, the estimated price is around 100 Euros.